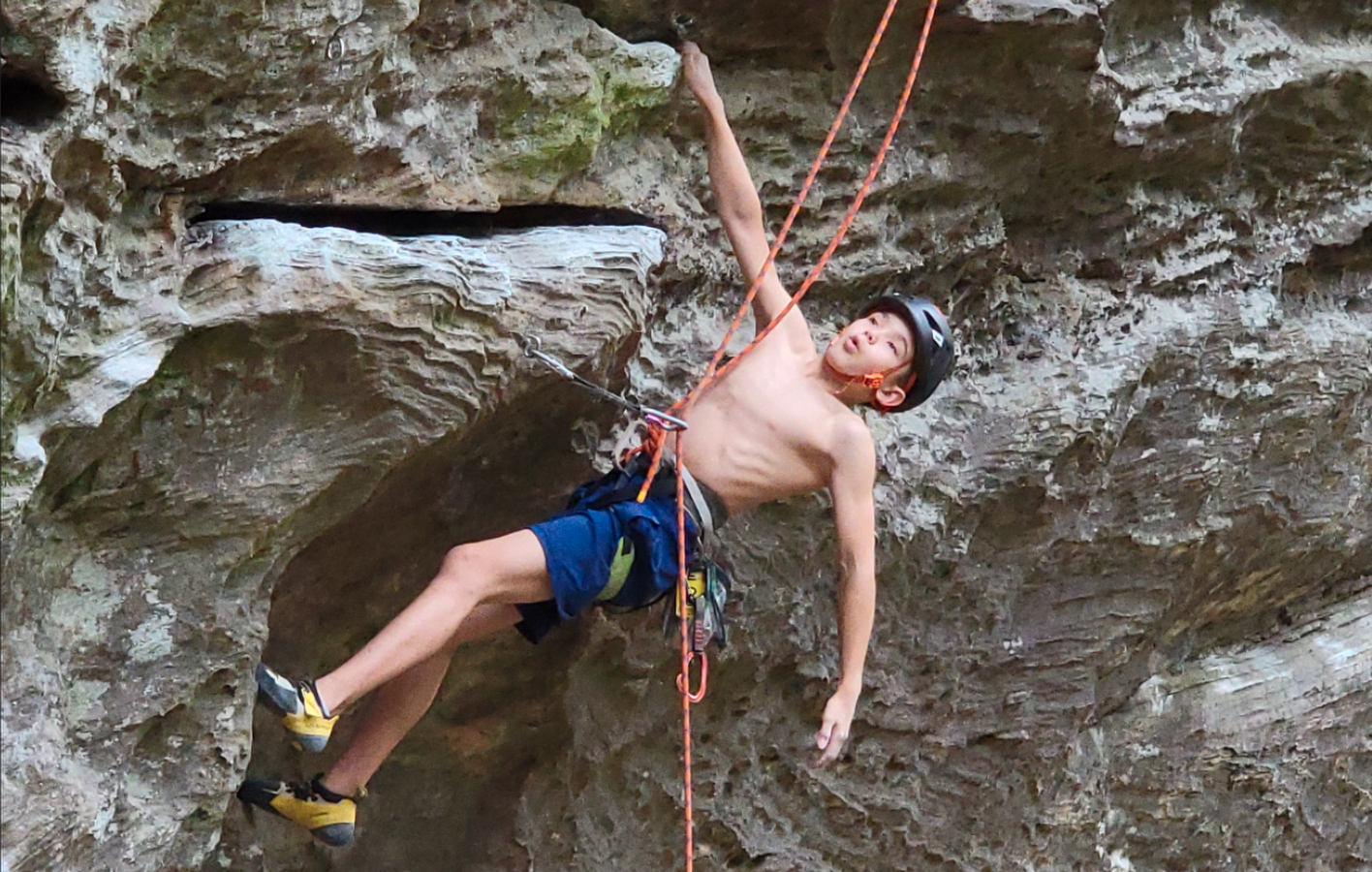 Logan Zhang has onsighted three 7c+'s in Red River Gorge (KY) all of them in the same day. The 11-year-old's sports background is totally amazing. In 2017, he set the current standing long jump world record for 6-year-old's with 1.84, video. Later he got growth plate problems in his feet which made him start Ninja warriors, amazing video. Within two years, also including starting to climb, in order to improve grip strength, he became the Youth World Champion. Anyhow, climbing was more fun, although being rejected for the gym team near their house. Two years later, at age ten, he was the national champion for 12-year-olds.

"After a rest day I set a goal to try to onsight 40 ounces of justice 5.13a. It was a really long climb in the cave. There were a few big dead points that made me nervous, but I didn't fall. I rested a lot more than necessary toward the end because I kept expecting a hard crux, but it was just a jug haul to the top. My next climb of the day was Skinboat, also 5.13a. I wanted to onsigth that one too. The start was tricky, but it wasn't as bad as I thought. I had to dyno off a crimp and pocket. I still rested at bad holds only to find a better hold later. The holds just kept getting better as I got closer to the top. I was really happy to get 2 onsigths. I wanted to try Hoofmaker 5.13a next, but it was taken so I went on Convicted 5.13a instead. It looked really confusing because there was chalk everywhere. I know I had some really wrong beta in a lot of parts. It felt so hard. After I watched the video I realized there were so many places I messed up, but I got lucky and still onsighted it. " Great pics and stories on his Insta and here is an amazing video from last year.

We asked his father Ocean about some comments in regards to Logan's amazing sports background. "The long jump age group record was just a combination of favourable genetics (my wife and I were both good jumpers early in life), good hip flexibility, and earlier than average motor-coordination development. Not much training went into it at all. We just found some local track meets he could compete in. He was above average in running events and really excelled in jumping. But I doubt he'd be jumping at an internationally elite level as a teenager. It was a cool title to own at the time, but achieving such a feat on talent alone, without working hard at it, wasn't the right lesson to teach our son.

Logan's Ninja warrior career started when he was sidelined with apophysitis, a condition that is similar to arthritis of the growth plates in his feet. He was unable to continue playing the sports he loved, so we found him a new outlet. He was a huge fan of the TV show, American Ninja Warrior. There was a local competition for kids, so we decided to enroll him, and he was hooked. Unfortunately there were no obstacle training gyms near our house at the time, so we built a ninja gym in our basement and over our swimming pool. He played on the obstacles at home after school and qualified for his first youth world championships when he was 8. He finished with a silver medal, far above expectations against older kids from big gyms who had professional coaches. By this time, climbing began to dominate his training. We dialed back his ninja training to once a week on the weekends, and usually included local kids who were looking for a ninja obstacle outlet. I would recruit athletic kids from playgrounds to come train with us on weekends just to surround Logan with talented athletes. He won the world championships for the kids division the following year.

With the climbing, we take him to practice 2 to 3x per week for 2 hours per session. We're usually let him stay after practice to do some off the wall training if he asks. His coach would love to see him go to all 4 practices, but we want to be very cautious about training volume for his mental and physical health. In addition to the team practices, we also take him to climb outside on Saturdays if the weather is nice. To prepare for our trip to the Red, Logan trained less with the team and focused more on long endurance training. One of his workouts was to climb every lead route in the entire gym without resting in between routes (except for the time it took to pull the rope through). I don't know if this was a proper way to train, but he was super psyched about the challenge. He completed the workout with 2 falls.

We've moved around a lot, so Logan has been with 5 youth teams in 4 years. We've always shied away from enrolling him on the most advanced levels of each team to ensure that his training volume wouldn't be so rigorous. On several of his former teams, I've requested that he not be part of any campus board workouts with the older kids. We're super paranoid about finger injuries.
3
0  C O M M E N T S:
Sort by: Date A Reply A

Four 8B+ by Killian Chabrier in a week

Killian Chabrier, who one month ago did his first 9a, has been on a 19 days trip to Magic Wood where he did four 8B+. ”The first 13 days I did a lots of clas…

Bayes Wilder has during a two weeks trip to Red River Gorge (KY) done Southern Smoke (8c+) in just six tries. This means he is the first ever 10-year-old to rea…

Bayes Wilder has during a two weeks trip to Red River Gorge (KY) done Southern Smoke (8c+) in just six tries. This means he is the first ever 10-year-old to rea…