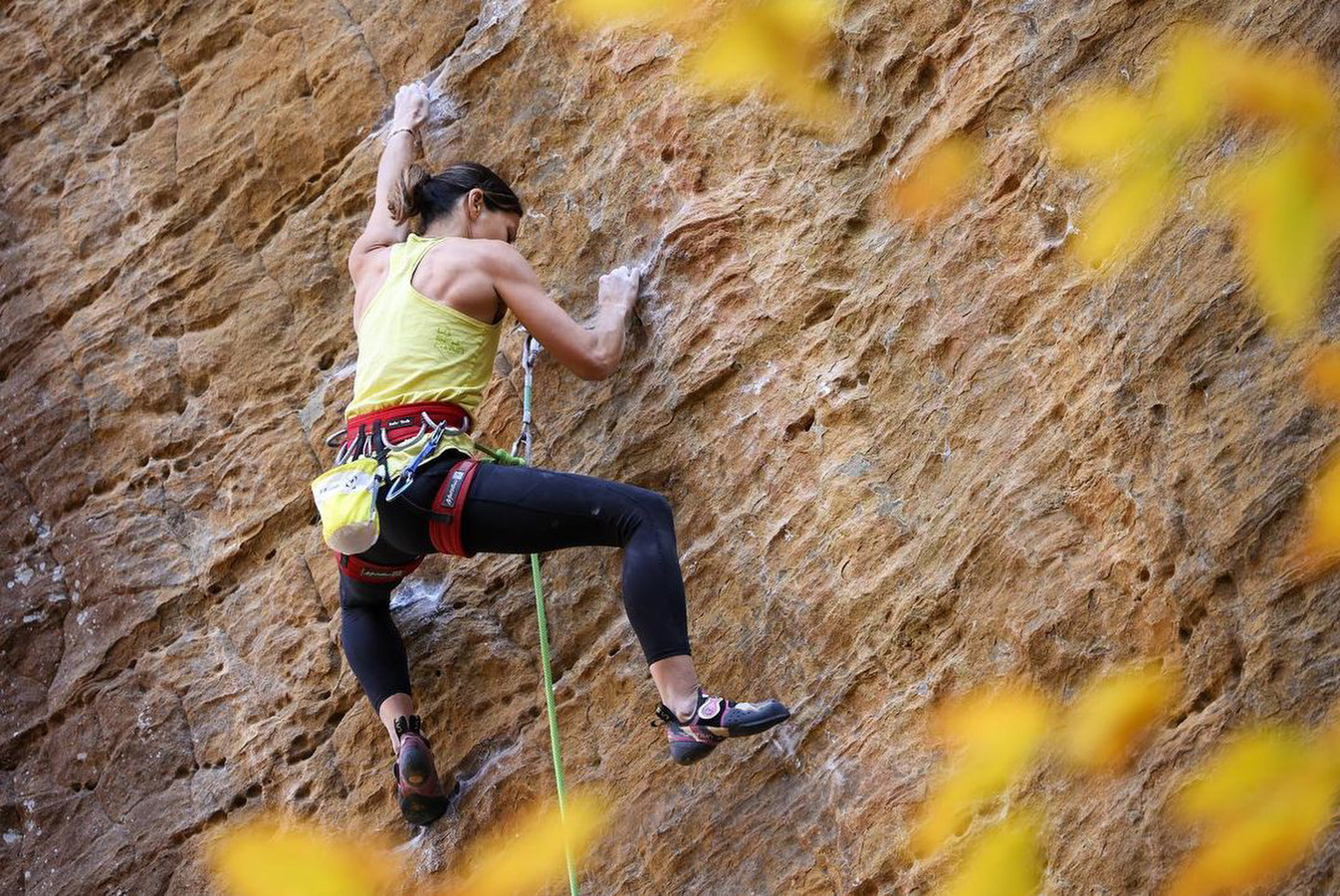 Audrey Sniezek, who did her first 8c at age 41, has done God's Own Stone (8b+) in Red River Gorge (KY). Noteworthy is that the 50-year-old did not climb much in 2021 until August. “Pretty happy with how this came together. Less than 10 tries, but I put a little time on it some years ago, not sending because I couldn't clip the crux quickdraw. I had no trouble clipping it this time! Such a beautiful line that I'm kind of sad it's over so fast!"

Could you please describe the process of taking it down?
9 years ago I was having a conversation with a young Margo Hayes under this beautiful climb called God’s Own Stone at the Red River Gorge in Kentucky. I was rushing out to try one more attempt before flying to Argentina. The route seemed so close to sending. I knew it could go that day. Margo was struggling and in tears because she hadn’t sent it, yet. She asked what I would do about the crux clip. Would I clip it or skip it? It was something I’d had to decide so I was familiar with the debate. There are people who skip it, but I told her it was part of my crux and that I was unwilling to skip it and take a potential fall higher up. Then, I followed that statement with whatever she decides, she needed to decide on the ground and stick to it. Otherwise, she would get to the quickdraw and potentially hesitate, wondering if she should or could clip. This would put her send at risk, wasting precious energy.

I don’t know what happened on her subsequent attempts, but she did eventually send the route. I, however, did not. I gave a good effort, found myself at the spot to clip the crux draw on point but couldn’t and because I refused to skip it, I ended up coming off the wall and not sending. While I was disappointed, I remembered how upset Margo was earlier and how upset I used to get at failure, too. I resolved to not be upset and to show Margo that she can enjoy the climb, have fun climbing, and that it didn’t matter if she sent or not. I don’t know if that was the impression I left but I didn’t cry after failing to send and my spirits were still high despite that. I left excited for Argentina hoping I would return and clean it up when I got back, but I lacerated my leg on a petrified tree stump there and that ended my climbing season for a while.

I’ve never forgotten about the route. Various life events kept me from getting back to try it again, including taking time to compete in the World Cups for as long as I could, then several injuries, and my own confidence in my ability leading up to trying again. Last year I shifted my mindset around what I could try and set about getting on routes that intimidated me. I got hooked on Omaha Beach and was super close to sending but weather didn’t hold up and I walked away. That spring I injured myself stripping caulk from my bathtub trying to fix some things to prepare my place to be rented out. That was the end of my hopes for Omaha Beach that spring, and any training or climbing dwindled to recreational attempts indoors.

Then, my nephew died in April and my whole world turned upside down. I stopped climbing and turned to the mountains, summiting Mt. Rainier and some other Cascade peaks. I thought this would have a healing benefit for my elbow but when September came and I was headed back to the Red River Gorge where my nephew had been living and died, I wasn’t sure how much climbing I would be able to do. Afterall, on top of facing this place without him, I hadn’t been outside climbing for most of the summer. When I arrived, I started on moderates. Just repeat what I knew I could do or should be able to do. Then, I started chipping away at mini-projects like Astro Dog, which is a fabulous but cruxy (for shorties) 5.12d/7c in Muir Valley. After sending a few of those, I thought it was time I test what I could do and go back to some unfinished business: Castle Has Fallen 5.13b/8a, Buttercup 5.13c/ba+, and God’s Own Stone 5.14a/8b+ were at the top of the list. I honestly thought it would take me longer to accomplish all of them. I gave Castle Has Fallen a couple goes the year before but strained my shoulder in the crux and walked away. I gave it one project burn this season, then went back and sent it my 2 nd go on Day 2 “working” the climb (total of 3 attempts this year). Buttercup I tried a few years earlier and fell at the crux quickdraw, not willing to skip it and risk falling higher. I had tweaked my finger with my beta in the crux anyway. This season, I gave it one bolt-to-bolt quick session, then walked it, improvising in the crux on my first redpoint attempt, clipping the crux draw as I went. When I got back on God’s Own Stone, my first go (Day 1) was horrible. I thought “how did I ever get close to redpointing this years ago?” My 2nd go (Day 2) was much better. I focused on the individual sections just trying to do the moves and make the clips. I struggled figuring out the crux. My 3rd go (Day 3), I stuck the crux move from the dog and went to the top, twice. Now I felt optimistic. I gave it 3 more goes on Day 4, sticking the crux and going to the top but only off the dog on my 3rd attempt. Scrounging a partner to go back there was a challenge but I found someone for Day 5 and walked the route, clipping the crux draw, on my first attempt.

This is my fifth 5.14 and first not in Washington State. It’s been a goal of mine to achieve that although I had hoped it would have been a route in the Frankenjura. I don’t put any emphasis on my age but having just turned 50 and sending 5.14 feels pretty good. It gives me hope that I still have time to achieve some other long standing climbing goals.

What were your level in August and how can you explain sending 8b+ at age 50 with so little climbing until August? Any specific training?
I was climbing 5.11 for a long time, maybe top roping 5.12- then I gradually started leading 5.12-, then 2 weeks before I left I was leading 5.12+ and linking the hardest lines I could as inside projects. I just gradually started challenging myself in onsighting, link ups, back to backs, difficulty. It was really about pushing only hard enough that my elbow didn't get inflamed and then seeing how it held up to see if I could notch it up in some way.

There wasn't any specific thing like hang board, or 4x4, or other "training", it was a combination of what I already understand about what I need, the resistance I was going for, and aiming to increase power without hurting myself and all on a rope. so creativity really helped, too.
9
1  C O M M E N T S:
Sort by: Date A Reply A

Cathy Wagner has done Ces démons niaquent (8a+) in Précipice de Corbière, giving it a personal 8a grade. "HAPPY! Outstanding route, where many technical kneebars around single tufa allowed me to compensate for my lack of the physical strength. But even with that, it was not at all given, especially …

Solveig Korherr, who did her first 9a this summer, has done Pure Imagination (8c+) in Red River Gorge (KY). "A dream line in of the best the climbing spots! The…

Angelina (Angie ) Scarth-Johnson made the first 8a headline at age 9 by doing an 8b in Red River Gorge (KY). Amazingly, her parents did not climb but supported …

Solveig Korherr, who did her first 9a this summer, has done Pure Imagination (8c+) in Red River Gorge (KY). "A dream line in of the best the climbing spots! The…

Angelina (Angie ) Scarth-Johnson made the first 8a headline at age 9 by doing an 8b in Red River Gorge (KY). Amazingly, her parents did not climb but supported …