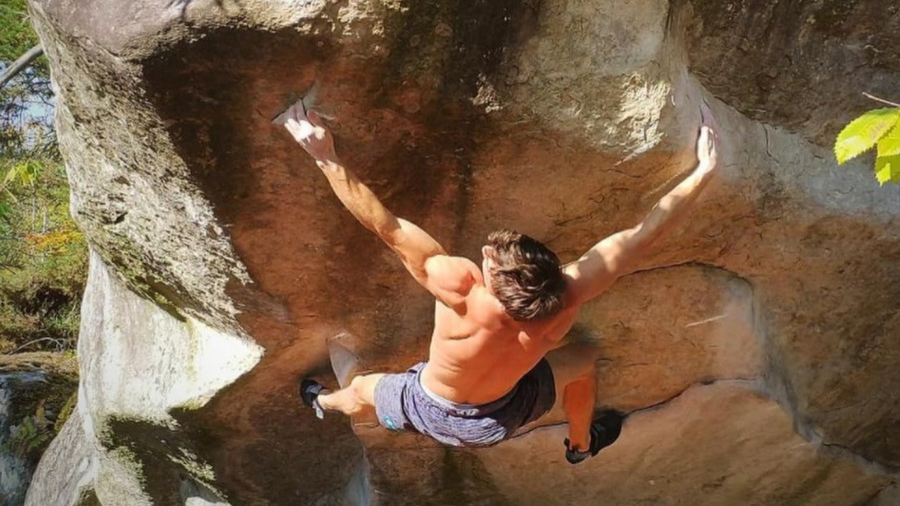 Simon Lorenzi reports on Insta that he has made the sit start of The Big Island. It has been a project for many years and James Webb has said that just the sit into the stand start is at least 8B+. ” The sit start is an incredible project. For me personally the bottom is at least 8B+ and maybe even harder than The Big Island itself. The intro (10 moves for my method) is very powerful, yet technical with a tricky kneebar that links you through to the stand. Once you’re there you just have to take a deep breath and with absolutely no rest climb the Big Island.”

Lorenzi has not yet suggested a grade, but if the grades stand, adding an 8B+ into an 8C (B+), means that it could possibly be the second 9A in the world or a very hard 8C+. The picture by Oriane Tollebeek is from last October when Lorenzi did the Big Island after just two sessions, saying it is possibly 8B+. This 168 cm tall guy has previously done three 8C's, but as they did go down in just one or two sessions, he thought they all just might be 8B+. In 2017, he did his first 9a, Action Directe, after eleven days of projecting.

One reason why we have not heard more about him is that he lives in Belgium and actually quite seldom climbs outdoors as he has focused on comps. In 2016, he won the Youth Worlds and the next year he was once #10 in the WC. Later he started to struggle. For 17 straight Boulder and Lead WCs, he was mainly #30 - 50, and it was not until the very last WC last year that he was back on track as #14.
32
6  C O M M E N T S:
Sort by: Date A Reply A