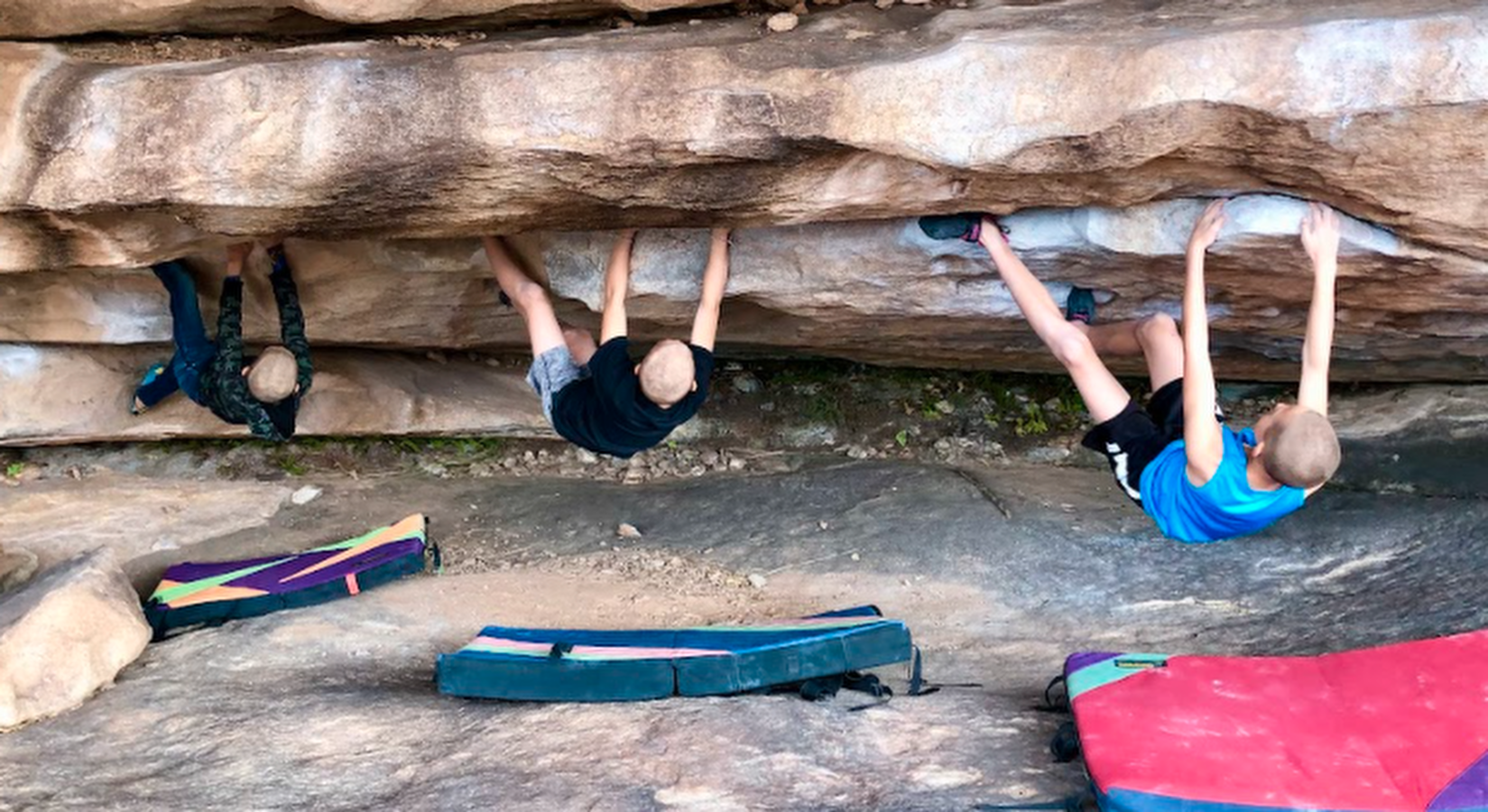 The Sullivan brothers, Keegan (12), Killian (10), and Lochlann (8) have been on a family trip to Hueco Tanks. We asked their father Brandon if he could sum up their nine days trip where the brothers did 150 boulders, including the day when all of them did a 7C+ and Keegan did Barefoot on Sacred Ground 8A+. Interestingly, the parents had never climbed when they put up a small wall in their basement eight years ago.

"This trip to Hueco Tanks was an absolute gift. We were treated to perfect weather, old friends, new friends, and world class boulders. It was our third trip to Hueco with the first two coming in 2018 and 2019. The weeklong trip was filled with many memories, but one day clearly stands out. On December 23rd, we met Steve Marek (friend and Blue Lizard Climbing guide) at the park’s gate. After a few radio calls, we headed into the backcountry for East Mountain. That morning, Keegan warmed up and began projecting Eckstein V10/7C+. The problem is a horizontal traverse across crimps and slopers. It requires compression which is difficult to maintain while switching from toe hooks, heel hooks, and presses. Once the traverse is complete, climbers move up a stiff wall on crimps. The finishing moves are pumpy, heartbreaking, and forced Keegan to the pads three times. On his send go, he climbed the traverse flawlessly, employed new beta for the finish, and smiled enthusiastically at the top. This was Keegan’s 17th V10/7C+, having sent his first when he was just eight years old.

From there, we packed up our pads and moved to East Spur where the boys ticked beautiful climbs and classics like Stinkfoot, Jigsaw, This Is Your Brain on Drugs, and Ministry of Truth. Killian was most excited to work Stubby of the Bush Veldt V10/7C+. Keegan had sent it on a prior trip and we knew the style suited Killian. The boulder is short, but powerful, and has interesting holds – like small, misshapen peanuts. We had a video of Keegan’s send and Killian was able to replicate the beta. After a handful of attempts, Killian executed the crux and stood on top of the boulder – his first V10/7C+.

Keegan and Killian moved to other climbs near Stubby, while Lochlann got inspired to try the stout boulder. Projecting with Heidi, he worked the moves individually, then began making links. Once the boulder was complete in two overlapping sections, he returned to the start holds and began his redpoint attempts. After 90 minutes of projecting, he let out as a scream as he stuck the crux sloper. A moment later, he had joined Killian and sent his first V10/7C+. While celebrating Lochlann’s send, we realized that all three boys had climbed V10/7C+ that day. Neither Heidi nor I, would have dreamed of such an accomplishment eight years ago while expecting Lochlann. No one in our family climbed, but we built a small wall in the basement for fun. That wall catalyzed our love for climbing and travel. Eight years later, the boys are collectively sending V10/7C+.

So what else happened on our trip? On December 21st, Keegan and Killian sent the uber classic, See Spot Run V6/7A. The highball climb is infamous for its sketchy upper slab, poor spotting, and broken ankles. After sending the beautiful problem on his second go, Keegan investigated its lower and more challenging start, Barefoot on Sacred Ground V12/8A+. For Keegan, the crux was setting a right heel to access the undercling, before jumping to the hueco. He had achieved the move in isolation, but was not able to execute the sequence from the start. Instead, he chose to skip the undercling and deadpoint to a taller crimp. This move was higher percentage and eventually unlocked the boulder. After only two hours of projecting, Keegan had landed the crux from the start holds, and linked into See Spot Run for the top. Not only was this Keegan’s first V12/8A+, it was a blast to share beta, psych, and sends with fellow young crusher, Bayes Wilder.

The boys teamed up for over 150 problems during our week in Hueco Tanks. They excel at balancing hard projects with classics and fun stuff. Keegan has developed an affinity for highballs, and Killian brings binoculars to identify birds between climbs. Lochlann loves absurd lowballs, and chases tough lines and classics like his sends of This Is Your Brain on Drugs V9/7C, Hector in a Blender, Sign of the Cross, Nobody Here Gets Out Alive, and the Vulgarian. What is their secret weapon? They have invincible skin even after a week of climbing ten hours a day. That plus youth and psych will take climbers quite far.

I consider our family to be very fortunate. First, my wife and I both work in education which provides several extended work breaks throughout the year. Second, we stumbled upon climbing when our children were young. The combination has provided opportunities to travel to gorgeous crags across North America. Steve Marek describes Hueco Tanks as “The Greatest Place on Earth.” After our trips there, I’m unlikely to disagree."
2
0  C O M M E N T S:
Sort by: Date A Reply A